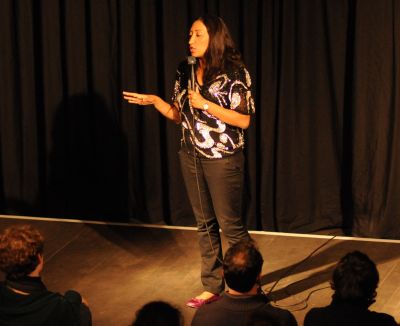 Shazia Mirza is a very funny award winning British Asian stand up Comedian from Birmingham England. She works all over the world and has toured the US, Sweden, Denmark, France Holland and Germany. She has appeared on CBS 60 Minutes, NBC’s Last Comic Standing, and Have I got News for You (BBC). Shazia could have married a rich man and lived in a mansion on The Bishops Avenue, with servants, bidets, and horses. But instead she chose to drive up and down the country for as little as ten pounds, staying in dirty lurid bed and breakfasts trying to make people laugh.She thought of giving up, but no Muslim man wants to marry her, now that’s she’s dabbled in jokes and fingered a few white men on the 38 bus.