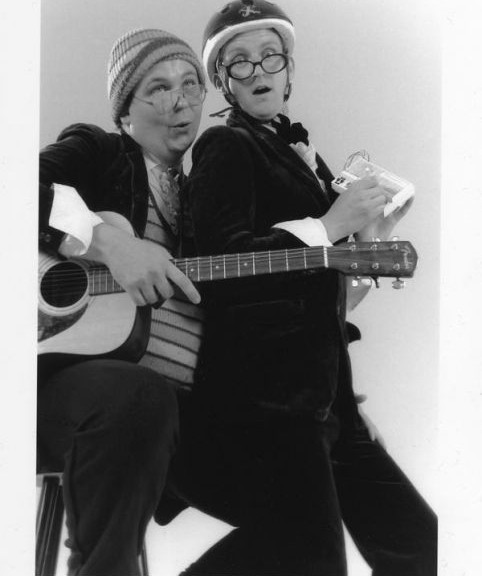 Drawn together by the irresistible force of showbiz in the mid nineteen eighties, Raymond and Mr Timpkins first chose to show off aboard the Portsmouth based pop band,
‘Uncle Barneys Atomic Wobblers’, until the natural forces of attrition bore down and the band distilled to the current ruggedly handsome duo.
Cutting their teeth compering and performing in Comedy and Variety nights at The Wedgewood Rooms in Southsea, the nineties wafted gently past until, eventually and not before time, London called. With the fledgling post-fix, “Revue”, added,
they blasted the clubs with their Guitar and Stylophone stylings,
wowing rooms with super slick prop manipulation, dazzling jaded eyes with sandal based choreography that remains inimitable.
Now, they tour the country, regularly headlining at Jongleurs clubs, even venturing as far afield as The Falklands and Oman, to provide spiritual uplift to the brave boys and girls of the armed forces.