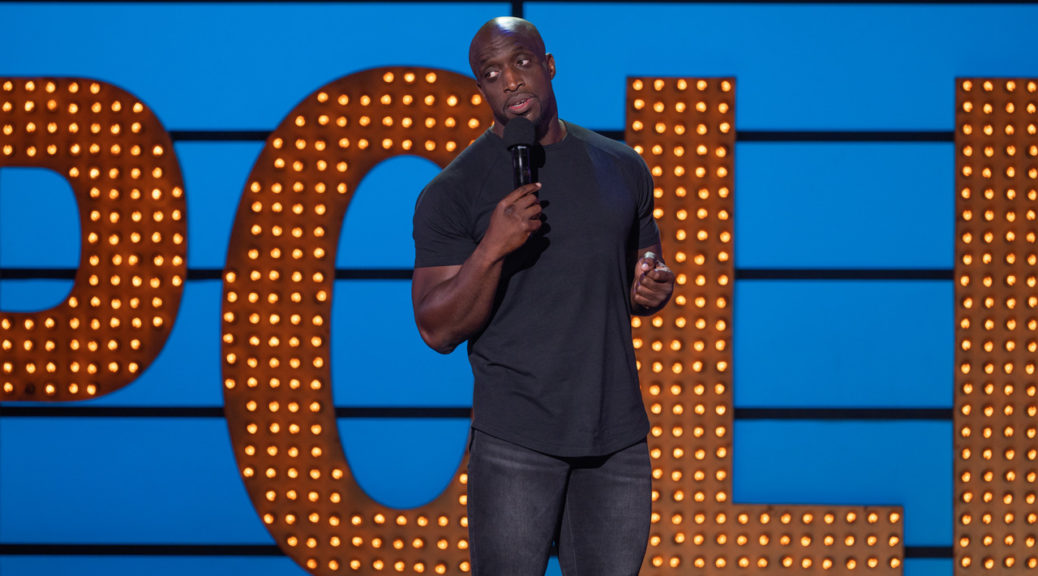 Sonubi has only been on the comedy circuit for what feels like five minutes and he’s already garnering himself a reputation as the ‘one to watch’! Having gone from open spot to closing BBC’s ‘Live at the Apollo’ in an incredibly short space of time you will be seeing big things from this big man in the coming few years.
“One of my favourite discoveries of 2019 was Emmanuel Sonubi. Hilarious, warm and unique. If you don’t see him now for a tenner, you won’t be able to smugly tell your mates about it when they’re paying £50 for a crap seat at the O2!”  – Jason Manford
His comedy career only started at the end 2015 and has since become regular favourite at the Comedy Store London, the MECCA of the UK comedy circuit. He has gone on to perform at many of the largest clubs in the UK and festivals including Altitude Comedy Festival in Austria, The International Comedy Festival in Rotterdam, Comedy Central Live, Camp Bestival, Download, Otherlands, Kendall Calling, Tramlines, Y-Not and performed at the Glastonbury Festival in 2022 to name a few.
“The bloke has got funny bones, He’s incredibly likeable.. despite looking like he could snap you in two!” – Romesh Ranganathan
You may have also caught him gigging in Holland, Ibiza, Cyprus, Turkey, Dubai & Iraq and will venture on his first European tour in Autumn 2022 performing in Brussels, France, Amsterdam, Prague, Copenhagen, Stockholm & Helsinki.
“Emmanuel is incredibly funny and I’m not just saying that because I’m scared of him..”
– Joel Dommett
A sought after act for corporate events and host at many award ceremonies.
Emmanuel made his TV debut on Comedy Central UK and was recently on The John Bishop Show for ITV1, The Stand Up Sketch Show on ITV2 and Comedy Central Live on Comedy Central.
“A new talent at the door of Stand-Up, his name’s down and he’s definitely coming in!”
– Russell Kane
Fact fans: in 2007 Emmanuel played the title role of Daddy Cool in the West End Musical ‘Daddy Cool’
“I’ve only ever seen this guy destroys rooms!” – Seann Walsh
Check it out a cool clip of Emmanuel acting and performing stand-up here: Emmanuel Sonubi Stand Up Sketch Show
Heres’ what the press said about his debut hour at the Edinburgh Fringe 2022
“Engaging story-teller” – Three Weeks
“Outright hilarious, his star is on the rise” – Fest
“As well as presence, Sonubi has excellent timing” – Chortle
“A polished, impeccable hour of stand-up” – Entertainment Now
“Side-splittingly funny, there are roaring laughs” – The Independent
“A very funny comedian, The full house certainly loved the show” – Squirrel Comedy
“Sonubi is a distinctive, classily polished act. His ascendancy appears assured” – The Scotsman
“This guy is going places and fast. Grab a ticket now, leave it and it may be too late”
– One4Review
“Big laughs, engaging tales, you’re seduced by the easy authority of of his storytelling”
– The Guardian
“At the top of the show, Sonubi promises his capacity crowd a great time and he delivers”
– On The Mic
“Emmanuel is so very cool. An hour in his company felt like 10 minutes, I could listen to Emmanuel do stand-up all day” – Voice
“There’s no denying Sonubi his impeccable craft. If he’s shooting for a BBC One primetime slot, this is bang on target” – The List
“This guy is a natural!, Hilarious. Consistent and there’s laughter throughout. It’s a solid hour with great writing and great delivery; he will be a star!” – @ComedyReviewer
Advance Ticket Sales