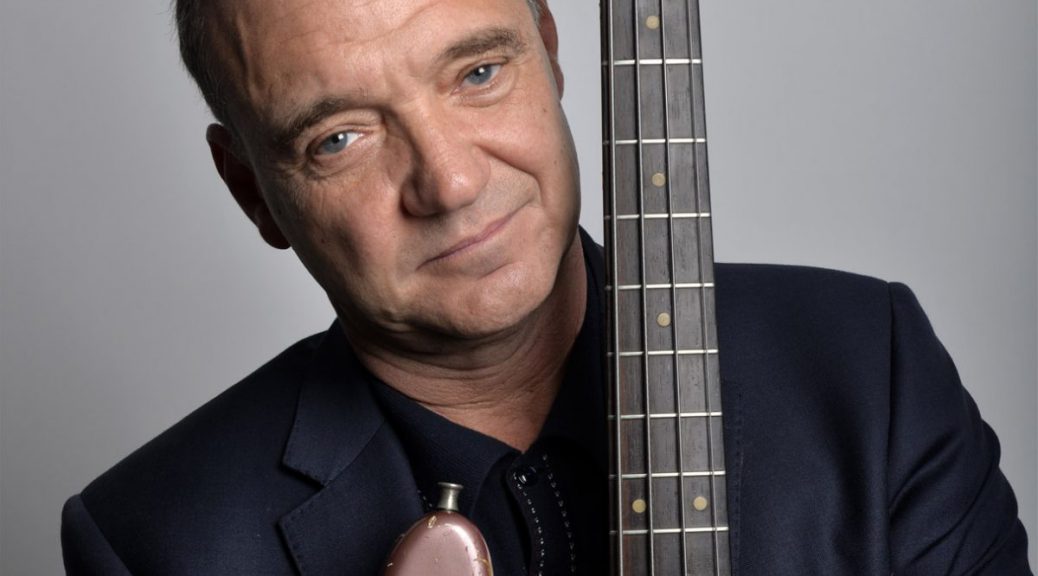 After a brief stint as a graphic designer, Guy decided to pursue a career in music which took off when he was asked to join (the then mas­sive in Australia) Icehouse for a world tour at the tender age of 19. In 1983 he sup­ported David Bowie on his leg­endary ‘Serious Moonlight’ tour.

This led to him being spotted and used by the likes of Robert Palmer, Bryan Ferry, Womack & Womack, and even The Smiths amongst others. He was thrust into the global pre­mier league of bassists when David Gilmour asked him to play for Pink Floyd.

After 13 months on the road he decamped to LA where he found him­self in demand by the likes of Madonna and Michael Jackson before heading off to play ground­breaking shows with Floyd in Venice and Moscow.

Pratt rose to promi­nence when he was chosen as the bass player for Pink Floyd’s post-​​Roger Waters Delicate Sound of Thunder and P*U*L*S*E world tours in 1987 and 1994. He co-​​performed the vocals in “Run Like Hell”, “Another Brick in The Wall (Part 2)”, “Us and Them” and “Comfortably Numb” with David Gilmour during the live shows. He also per­formed on sev­eral tracks on The Division Bell album, though most of the bass parts were per­formed by Gilmour. Tony Levin per­formed most of the bass parts on Momentary Lapse of Reason, with Pratt replacing him on the accom­pa­nying tour due to Levin ‘s unavail­ability.

He also toured as part of Pink Floyd gui­tarist David Gilmour’s On an Island band, along­side another Pink Floyd member (and his father-​​in-​​law), Richard Wright.

Guy has played on count­less hit records for the likes of Tom Jones, Sophie Ellis Bextor, Iggy Pop, The Pretenders, Ronan Keating, Electronic, Echo & the Bunnymen, The Orb, Natalie Imbruglia, All Saints, Bond, and Elton John. As well as touring with Coverdale Page, The Power Station and Gary Moore.

He has also tried his hand at writing and pro­ducing, notching up hits with artists including RobertPalmer, The Orb, Fat Les, Jimmy Nail, Marianne Faithful and Debbie Harry.

He has won a Grammy and been nom­i­nated for 2 Ivor Novello Awards.

Aside from his bass playing, Guy has spent time in the com­par­a­tively quiet world of Film & TV music com­posing. He has con­tributed score and songs for ‘Hackers’ and ‘Still Crazy’ as well as writing and pro­ducing the scores for Channel 4′s ‘Spaced’ (Series 1&2), ‘Now You See Her’ (film for Sky TV), ‘The Young Person’s Guide to becoming a Rock Star’, ‘Randall & Hopkirk (deceased)’, and the BBC series ‘Linda Green’. Also con­tributing to Dawn French’s ‘Wild West’ and ‘Jimmy Nail’s Crocodile Shoes 2′. Not to men­tion the theme music for ‘the Pepsi Chart show ‘and var­ious com­mer­cials.

Documentaries include ‘Riddle of the skies’, ‘The Roswell Incident’, ‘Terror in Texas’, ‘Gloria’s Toxic Death’, ‘The Underboss’, ‘Tracing Che’, ‘Greatest Heroes’ and ‘The Oldest Mummies on earth’.

For the­atre he co-​​wrote the score for ‘The Bedbug’ by Mayakovsky with Gary Kemp, ‘The Remarkable Piety of the Infamous’ which was per­formed at The Baron’s Court Theatre and ‘Lena’ by Carla Lane per­formed at the Valley Theatre, Liverpool and The Pleasance, Edinburgh. He was also Musical Director of  ‘I just called by to see the man’ directed by Richard Wilson at the Royal Court.

In 2005 he took his one man comedy show, ‘My Bass and other Animals’ to Edinburgh, where it was a sell out hit. He then toured it suc­cess­fully over the next few years, whilst finding time to squeeze in tours and recording with David Gilmour, Roxy Music (with whom he appeared at Live 8) and Bryan Ferry. He also played on the Jimmy Page/​ Leona Lewis ver­sion of ‘Whole Lotta Love’ for the Beijing Olympics.

His book ‘My Bass and other Animals’ was pub­lished in 2007, gar­nering both crit­ical and com­mer­cial suc­cess, and cur­rently on it’s fifth reprint.

In July 2008 he under­took a twenty one date tour of Australia with his updated show ‘Breakfast of Idiots’. He had pre­vi­ously taken his show down under twice before, including 2 appear­ances on the smash hit TV show ‘Spicks & Specks’.

Guy returned to the Edinburgh fes­tival in 2010 with his new show ‘Guy Pratt’s Wake Up Call!’ which he also per­formed at the Manchester Comedy Festival and Notting Hill’s 20th Century Theatre in October 2010. He embarked on a tour of Australia and New Zealand with the show in the Spring of 2011. Guy was also the musical director of the last two series of The Rob Brydon Show.

He was also host of 2 major events and inter­na­tional con­sul­tant on the Word Adelaide Festival in August 2013.