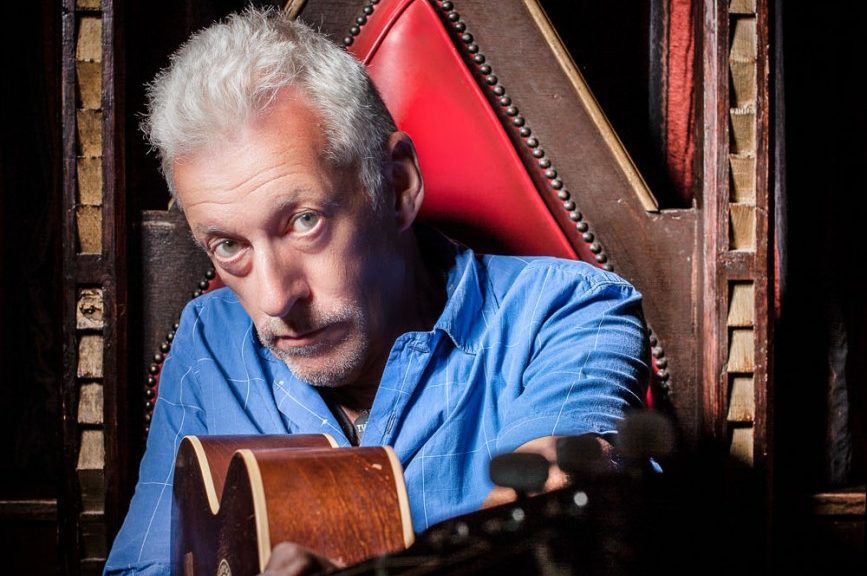 Ronnie Golden’s journey has been a long and fascinating one.
From opening shows for Tom Jones, Scott Walker and Engelbert Humperdinck as a teenaged guitarist, he worked with David Bowie in his Beckenham Arts Lab days then went on to form cult late 70s renegades Fabulous Poodles whose album Mirror Stars outsold both The Clash and The Jam in America in the early 80’s.
Within a few short weeks of that band’s demise he was doing stand-up at London’s Boulevard Theatre alongside Comic Strip regulars Rik Mayall, Ben Elton, a nascent French and Saunders and Alexei Sayle and performing a legendary ‘Buddy Holly’ in the first series of BBC 2’s The Young Ones. He remains the only original member from The Comic Strip team to still be actively working on today’s comedy circuit. There were several guest spots and cameos: he played Tracey Ullman’s ‘son’ inC4’s first Friday Night Live then performed with Mac McDonald in Saturday Live and was a detective and then a ‘doo-wop’ singer in a couple of Lenny Henry Shows. His voice, regularly heard on Spitting Image was featured on the No.1 single “The Chicken Song/We’re Scared Of Bob.”
Radio jingle writing won him an award for “most interesting use of music” in Independent Radio Awards in the early 90s for 60sec acapella song for Ariel Automatic and his harmonica could be heard on TV’s “Finger of Fudge” commercial(!!)
He’s played an MI6 agent in the 1986 movie The Fourth Protocol (with Pierce Brosnan and Michael Caine,) a heroin addict in C4’s How Much Is Too Much? won awards for composing advertising jingles, and is a much sought after voiceover artist.
Arthur Smith Sings Leonard Cohen, a two-man piece Ronnie performed with Arthur, won considerable plaudits on the Edinburgh Fringe 2000 and went on to the Ambassadors Theatre in London’s West End and then onto Montreal Comedy Festival.
His 6 piece R&B/Soul outfit Ronnie and the Rex still perform their Club Senseless nights in N. London and the West End and, over the past five years, have recorded four series of Radio 4’s The Right Time for which Ronnie wrote songs and sketches.
A selection of some of his best compositions for the band is available on cd “Return of the Fabulous Poodle” (Turns)
Eight nights of solo music gigs in New Orleans back in April 2003 led to him writing an article about these shows as well as reviewing the Jazz Heritage Festival for July issue of Word magazine.
He performed standup in Brit. Com at the Montreal ‘Just For Laughs’ Comedy Festival in July 2003 as well as a reprise of the ‘Leonard Cohen’ show with Arthur.
A winning combination with comedy legend Barry Cryer has yielded several successful Edinburgh Festival shows and a live cd: “Rock ‘N’ Droll” on Laughing Stock Recs. They regularly perform their 2 hour show in theatres across the UK.
At 2004 Edinburgh Festival he played a drug-addled, alcoholic, self-destructive blues singer Prince Royale in ‘noir’ boogie woogie / blues musical The City Club which became a small budget Hollywood movie entitled Dark Streets. He collaborated on the score for this with composer / musician James Compton.
He appeared in Radio 4 sitcom Ed Reardon’s Week and recently on the panel show ‘Act Your Age’ and has guested in several series of Radio 2 music / comedy show Jammin’ .
New Zealand-born composer Mark Hardy invited Ronnie to contribute vocals to his songcycle Listen To Me which is due for release in the Autumn of 2010.
He continues to write and tour with Barry Cryer.